Last weekend I went to Northern Virginia to present “Read Like a Writer: How to Get Kicked Out of Book Club” to a book club conference. I was treated to two fantastic crowds. People curious about how a writer reads other writers’ work.

I want my writers to do better. So I read their work and say, “Why did you include that character’s point of view?” and “Does this have to take place in New York City? What’s the value?”

Whenever I deliver that talk, I tell the three stories of how and why I was ousted from book club. These always get chuckles.

Afterwards, I went to Reston Town Center which is a prominent setting in After December. Unfortunately, several of the locations in the book are no longer there, but it was cool nonetheless to be there and taking photos and videos. 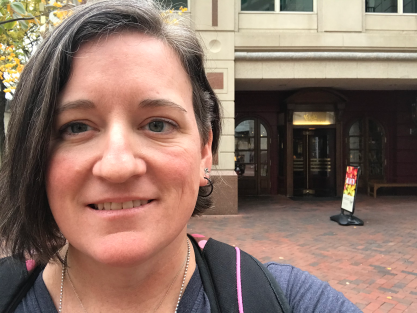 I tried to think about Brian, I really did, but I kept coming back to another story I wrote about Clyde’s of Reston. In it, the narrator runs into her first real crush as she’s taking her daughter to her first day of kindergarten. She can’t help but remember the last time they saw one another: at the bar one night over Christmas break. They were both in college in 1998 and had different versions of why they lost touch six years earlier.

They rekindle the spark they’d always felt. They go home together.

Two things: 1) I tried to ride through the 7 Eleven they visited in the story but it’s not there anymore. Boo! 2) Not coincidently, this story is also about a Brian. THE Brian. But it’s TOTALLY fiction. Completely. Entirely. Nothing about it true at all. So, relax. All of you.

Here’s a clip. Sign up for the email list and I’ll send you the entire story. Promise.

In the chaos of Sophie’s first-day-ness, competing memories simmer within me. When I focus on a particular strain, it’s finding the desk with my name on it and glancing over to see who would sit next to me, the excitement of new toys to play with, new friends to make, hoping I’ll be strong enough to climb the rope to the top this year. It’s Sophie’s first day but the familiarity of it is intoxicating. Almost every aspect of Sophie lately sends me into the tailspin of my own cyclonic childhood. I watch her and try to soak up some of her excitement. But mostly I want to stare at Brian. Really stare at him.

I had rolled my eyes. “Can’t do any better than that?”

I grinned. “Okay, then. Let’s make that happen. Buy me a drink.”

And he did. Clyde’s was packed and we had staked out a couple of barstools. I scored mine because I’d gotten there before the crowd. Brian lucked out. As he elbowed his way toward me, the couple next to me cashed out and left.